The Best of Liberty Corner

Go to "Favorite Posts" at Politics & Prosperity.
Posted by Loquitur Veritatem at 4:02 PM

This is an addendum to "Cell Phones and Driving, Once More," at Liberty Corner. In that post, I dispense with the attempt by Saurabh Bhargava and Vikram Pathania (B&P) to disprove the well established causal link between cell-phone use and traffic accidents through a poorly specified time-series analysis. (Their paper is "Driving Under the (Cellular) Influence: The Link Between Cell Phone Use and Vehicle Crashes," AEI-Brookings Joint Center for Regulatory Studies, Working Paper 07-15, July 2007.) The question I address here is whether it is possible to quantify that link through time-series analysis.

Coming directly to the point, a rigorously quantitative time-series analysis is impossible because (a) some of the relevant variables cannot be quantified -- item by item, along a common dimension -- and (b) others are strongly correlated with each other.

The relevant variables that cannot be quantified properly are improvements in the design of automobiles and the streets and highways on which they travel. There simply have been too many different improvements over too long a period of time, during which other significant (and correlated) changes have taken place. There can be no doubt that the design of automobiles has evolved toward greater safety almost since their initial production in the 1890s. What were flimsy, open-bodied carriages with no protection for their occupants are now reinforced, air-bag and shoulder-harness-equipped juggernauts with safety glass, power brakes, and power steering. In parallel, city streets have evolved from unmarked, uncontrolled, unlighted buggy routes to comparatively broad, well-controlled, well-lighted avenues; and highways have evolved from rutted, dirt wagon tracks to comparatively smooth, wide, controlled-access expressways. Thus the combined, long-term effects of design improvements on traffic safety can be seen in aggregate statistics, to which I will come.

Relevant variables that are strongly correlated with each other are traffic fatalities per 100 million vehicle-miles (the dependent variable in this analysis); the proportion of young adults in the population, as measured by the percentage of persons 15-24 years old; the incidence of alcohol consumption, as measured in gallons of ethanol per year; per capita cell-phone use (in average monthly minutes); and the passage of time (measured in years), which is a proxy for improvements in the safety of motor vehicles. Here are the cross-correlations among those variables for the period 1970-2005 (1970 being the earliest year for which I have data on alcohol consumption):

(The endnote to this post gives the sources for the various statistics discussed and presented in this analysis.)

Obviously, given the strong correlations between the percentage of persons aged 15-24, per capita alcohol consumption, and year, only one of those three variables can be accounted for meaningfully in a regression on the dependent variable, fatalities per 100 million vehicle-miles. Year is the obvious choice, in that it accounts not only for the percentage of 15-24 year olds and alcohol consumption, but also for improvements in the design of motor vehicles and highways.

That cell-phone use is negatively correlated with the fatality rate is merely an artifact of the general decline in the fatality rate, which began long before cell phones came into use. Similarly, the negative correlation between the percentage of 15-24 year olds and the volume of cell-phone use is an artifact of the trends prevailing during 1970-2005: a general decline in the percentage of 15-24 year olds (after 1977), accompanied by a swelling tide of cell-phone use.

Regression analysis illustrates these points. First, I used year as the sole explanatory variable. Despite the high R-squared of the regression (0.911), it lacks nuance; graphically, it is a straight line that bisects the meandering, downward curve of fatality rate (see below). Introducing 15-24 year olds and/or alcohol consumption into the regression would yield a better fit, but because those variables are so strongly correlated with time (and one another) their signs are either intuitively incorrect or their coefficients are statistically insignificant. (This is true for15-24 year olds, even when the regression covers 1957-2005, the period for which I have data for the percentage of 15-24 year olds.)

Adding cell-phone use to year results in a better fit (R-squared = 0.948), and the coefficient for cell-phone use squares with the results of valid studies (i.e., it is significant and positive). But because of the exclusion of 15-24 year olds and alcohol consumption, cell-phone use carries too much weight. Here is the equation:

This equation, when viewed graphically, loses its charm: 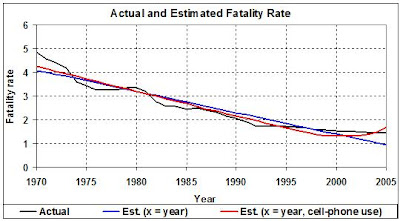 A more meaningful relationship is found in the strong, positive correlation (0.973) between cell-phone use and the portion of traffic fatalities that the passage of time fails to account for after 1998, that is, where the blue line crosses below the black line in the graph above. (Similarly, the "hump" in the black line that occurs around 1980, and the declivities that precede and follow it, can be attributed to the rise and fall of the population of 15-24 year olds and the consumption of alcohol.)

It's time to pull back and look at the big picture. The rate of traffic fatalities has been declining for a long time, owing mainly to improvements in the design of autos and highways. Thus: 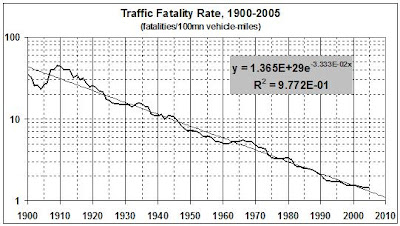 Even though a meaningful time-series analysis of traffic fatalities is impossible, it is possible to interpret broadly the history of traffic fatalities since 1900. The first thing to note, of course, is the strong negative relationship between the fatality rate and time, which is a proxy for the kinds of improvements in automobile and highway safety that I mention earlier. Those improvements obviously predate the ascendancy Ralph Nader's Unsafe at Any Speed (1965), and the ensuing hysteria about automobile safety. Consumers had, for a long time, been demanding -- and getting -- safer (and more reliable) automobiles. The market works, when you allow it to do its job.

The initial decline in the fatality rate, after 1909, marks the transition from open-sided, unenclosed, buggy-like conveyances to cars with closed sides and metal roofs. Improvements in highway design must have helped, too. Ironically, the drop in the fatality rate became more pronounced after the onset of Prohibition in 1920. It leveled off a bit in the late 1920s, when the "reckless youth of the Jazz Age" came to the fore, equipped with cars and bootleg gin. The rate then spiked at the (official) end of Prohibition (1933), suggesting that that ignoble experiment had some effect on Americans' drinking habits. The slight bulge during World War II reflects the increasing unreliability of autos then in use; relatively few Americans could afford new cars during the Depression, and new cars weren't built during the war. The vigorous descent of the fatality rate from 1945 to the early 1960s captures the effects of (a) the resumption of auto production after WWII and (b) continued improvements in auto and highway design. Later bulges and dips in the fatality rate can be traced to the influence of a growing, then declining, population of young adults and the (presumably related) rise and fall in per capita alcohol consumption. Then, along came the cell-phone eruption, with its tidal wave of inattentive drivers, as impaired as if they had been drinking. (The prospect of encountering a cell-phone-using drunk driver is frightening.)

Here are some observations and predictions:
I now come to the Peltzman effect: "the hypothesized tendency of people to react to a safety regulation by increasing other risky behavior, offsetting some or all of the benefit of the regulation." The effect is named after Sam Peltzman, a professor economics at the University of Chicago, who in the 1970s originated the theory of offsetting behavior. Peltzman, writing in 2004, had this to say:

A recent article [here] by Alma Cohen and Linan Einav (2003) on the effects of mandatory seatbelt use laws.... shares with most such studies the crucial bottom line: The real-world effect of these laws on highway mortality is substantially less than it should be if there was no offsetting behavior. [Cohen and Einav] conclude that the increased belt usage occasioned by these laws should, in the absence of any behavioral response, have saved more than three times as many lives as were in fact saved.

Equally important, this kind of "regulatory failure" does not arise because the engineers at NHTSA are wrong abou the effectiveness of the devices they prescribe. Most studies show that, if you are involved in a serious accident, you are much better off buckled than not and with an air bag rather than without. The auto safety liberature attributes the shortfall, either implicitly or explicitly, to an offsetting increase in the likelihood of aserious accident.

Imagine the lives that would have been saved without the "help" of the Naderites of this world.
__________
SOURCES

Fatality Rates. These are from the Statistical Abstract of the United States (online version), Table HS-41, Transportation Indicators for Motor Vehicles and Airlines: 1900 to 2001, and Table 1071, Motor Vehicle Accidents--Number and Deaths: 1980 to 2005.

Per capital cell-phone use. I derived monthly cell-phone use, by year, from Trends in Telephone Service, February 2007 (Wireline Competition Bureau, Industry Analysis and Technology Division, Federal Communications Commission). I obtained total monthly cell-phone usage by multiplying the December values for the number of subscribers, given in tables 11-1 and 11-3, by the average number of minutes of use per month, given in table 11-3. The values for monthly minutes begin with 1993, so I estimated the values for 1984-92 by ussing the average of the values for 1993-98. To estimate per capita use, I divided total monthly minutes by the population of the U.S. (see above).
Posted by Loquitur Veritatem at 12:00 PM